A few weeks ago I attended the MXUG hosted by Thoughtworks, the Melbourne X(any technology) User Group. http://sites.google.com/site/mxugau/home

It was my first time attending MXUG, the group was mostly attended by Ruby on Rails and Java developers. There were over 40 people there but only myself and 2 other .net developers, it was a very different experience from my usual user groups. I thought that others might be interested in what goes in at a non-.net usergroup.

The evening was divided into 2 full talks, Pizza & beer break, and then lightning talks for anyone that wanted to stand up and talk. I've tried to give a summary of what topics were talked about.

The first talk was a full length one done by Robert who talked about Chef http://wiki.opscode.com/display/chef/

Chef is a server configuration tool for *nix / BSD machines. You have a series of “cook books” which define server configurations, such as “have folders configured this way”, “must have apache installed”, “install php”, “xcopy from the drop folder”, anything you might do to usually configure a server.

In a way you can think of it as being like TFS deployer for the *nix world.

The chef recipes are Ruby DSL. The chef system is smart enough to know the difference between Apt-get and Yum. You just say “get the apache package” and it will sort out how to get it. Chef uses CouchDB under the covers. 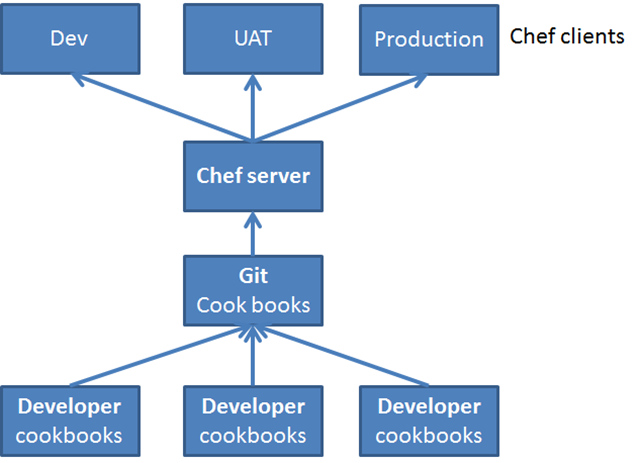 Text to speech commands in your workflow

@BrentSnook did a quick 5 min talk on cool things they have been doing with text to speech commands.

e.g. say “hello” will make the computer read out ‘hello’ in the default voice.

Their idea was to put the say command into their scripts, so that you could hear when a build complets

Danial then mentioned Cofee script for. He summed it up as “it is like javacript, but you hate it less”. He mentioned that it is a simpler syntax for lots of common things you’d have to try to code around, like have a reference to '.this’. It is compiled down to javascript.

You can still use it with JQuery (that is about all he had time to mention).

Getting BA/testers to write tests is more useful, tools like cucumber help. The problem is trying to get a BA’s computer set up to run cucumber tests can be quite an ordeal.

he uses a .bat script to install prereqs onto a machine (tomcat, java, etc). then uses gems to install the rest.

Then he runs a command script to automate the browser. That way the BAs can see if the tests are working, and see that the system does work.