Reghack was a 3 day hackfest that ran in Melbourne, Australia https://reghack.org/

The problem statement asked:
Do you have an interest in helping solve regulatory issues in the Financial Services and the Energy Sector in Australia?
How do we use RegTech to make regulatory compliance a strategic advantage that's a win for the regulator, market participants and the consumer?

The focus of the event was to try and invigorate local innovation in the energy & financial services sectors, by allowing people to come together and explore how Blockchain could be utilised in these areas. The event was the brainchild of Chami Akmeemana https://www.linkedin.com/in/chami1/ who is a director of ConsenSys, the largest Blockchain focused consulting company in the world. Chami came to Melbourne and asked for local community support to help him organise and run the event. I was lucky enough to be tapped by Chami and invited to assist. I helped out by providing sponsorship for the meals via Microsoft, and delivered training to help upskill the community beforehand (more about that below).

The event had around 90 participants, with many more volunteers on the day. In the end 14 teams pitched their ideas which ranged from energy trading systems, ways to authenticate documents, to ways to eliminate GST during B2B transactions.
A big thanks to Chami for organising it all, and to all the volunteers that helped make the event a resounding success.

Note: The roundup of the teams pitches are at the bottom of this post.

We worked with Josh Buirski one of the organisers of the local Ethereum Melbourne Meetup to try and tackle this hackfest differently. Usually at hackfests the technology is introduced at the event and attendees are required to learn the technology whilst trying to design and build a solution to pitch.

We ran 3 events in the lead up

There were different people at each of the events. In total we trained around 140 people. The event kicked off with Chami introducing a number of important speakers who gave short speeches to help guide the teams. They included 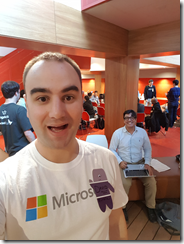 There was food which was sponsored by Microsoft. Subway and pizzas fuelled the meals, and first press coffee supplied cold press coffee shots to help the hacking power on through the Friday night and late into the AM.

Although we delivered a heap of training before the event, half the attendees still hadn't seen the Blockchain training as they weren't able to make the pre-events. I ran a supplementary training event at 10pm on the Friday night to help kickstart the teams that were still struggling. The judges were well known people within the community

New kids on the block
Compliance proof land registry.
Doing land registry transfers on the Blockchain. But putting the compliance aspects into the smart contracts so that it happens automatically as part of the transaction, rather than as an additional expense after the fact

Revolt
Get the highest rewards for your renewable energy
Currently takes 5.4 years for households to pay off solar panels (due to the low feed in rates).
Want people to be able to sell solar at a higher rate? Don't understand the use case.

Vacancy Ledger
Victoria has an issue with vacant housing, when people are looking for places to live.
So the state government implemented a "vacancy tax". They plan on using "water usage" which could be gamed by just leaving your water tap on.
They propose using energy usage tracking as a more reliable way of detecting vacant lots.
enquiry@digitalvalue.io

Reputation builder on Blockchain
Each person on average verfies/notarises at least 5 times per year
More than 10million doc verifications conducted annually in Australia.
Have verifiers earn "reputation points" when they verify, which gets damaged if they verify dodgy documents

The Living Grid
Self contained peer to peer electricity trading market .
You only trade within your local grid network. Tries to balance prices within a local grid. If power has to be transferred a longer distance, then prices are adjusted due to network transmission losses.

Finpass
Lenders are missing the opportunity to lend to "slashers". "I'm an Uber driver / barrister / AirBnB host".
If they want a loan, it is difficult to prove income as they don't have verified "payslips".
The "employers" when they generate a payment slip, can digitally sign it and put a hash into the Blockchain. On the payment slip, they can put the hash and a QR code. That way printed out copies can still be verified. Then when a bank wants to verify the payment slip, they enter the key details into the Finpass website which will regenerate the hash and check if the issuing company has attested that they have issued it.

AuthTrack
Allow anyone to issue and verify document authenticity.
Is done by hashing entire digital files. Allows anyone to authorise their own documents. Need to try and track people who authorise dodgy documents.

Specter
Enabling soloar innovation through solar incentives?
Groups can come together to pool money to purchase solar equipment, and they can then share the solar generated / sold.

Blocked
Currently the only incentive with power bills is to pay your bill early for a small % discount
Want to allow people to pre-pay for electricity, on the blockchain.

Sharenergy
Only a small percentage of your roof is required for solar to be self sufficient. But no real incentives to harness the entire potential of energy generation.
want to create a system for new community developments to create their own microgrid for peer to peer energy trading. Said it is only suitable for greenfield developments.

Mr Eli
Team had no Blockchain knowledge before they came. Came here as a learning experience to explore and learn.
They focused on trying to find a solution around awareness and lower the barrier of entry into Blockchain world.
Built a chatbot to allow you to ask questions and learn about Blockchain.

Electikey
Millions of smart meters, but no standards. No security or encryption.
Want to have "full node" blockchain enabled smart meters. That will encrypt and put usage data onto Blockchain. Data is all put into a mega "data lake". Allow suppliers to mine it for usage trends. Want to blend it with consumer's social media so they can target them better.
Want to help create a new smart meter standard for new meters going forward.