Today we are going to be talking about Windows 8
We are launching a new opportunity for developers. No matter what the size or shape of the PC.

Starts off by talking about Windows 7
Approaching 450mil copies of Win7 sold.
Win7 usage is FINALLY greater than WinXP
Delivered over 1,500 product changes to Win7 (through patches) since RTM

Form factors for PCs have been changing.
Win7 started delivering touch.
Steve thinks that once you start using touch in Win8, that you will want touch on EVERY PC you own.

"What is Windows 8?"
Everything that was great with Win7, they took that and made it "better"
"you get to build on top of all of that success of Windows 7, with Windows 8"
"Windows 8 reimagines what windows should be". In reference to quick boot, better touch, system on a chip.
Win8 reimagines what hardware windows can run on.
Everything they are showing today work on x86 and ARM

They are going to do 4 main demonstrations today

To show off that Win8 is more efficient, he brings on stage a 3 year old netbook with 1GB of ram.
He first shows it with Win7 SP1 installed

And then demonstrates what the task manager looks like with Windows 8. A lot less memory usage

It is important to understand that everything they are showing is a part of windows. It is all built natively in windows, and not as "layers".

Shows the new "lock screen"
Has all of the "at a glance" information
Next calendar appointment.
Battery level, messages, etc.

The new login screen
It is a "picture password" to save you from having to type passwords in a "touch centric" interface.
She touches her daughters nose, then the lemonade, then draws a line along the railing to log in.

The new start screen.
Live tiles EVERYWHERE!
Can pan to the left and right to see more tiles
Each tile represents an application.
Can see calendar, rss feed, paused music

The start screen is an integration/unification of all application functionality.
One place to integrate your applications in with.
Can drag tiles around (like WP7)

Can pinch zoom out to see all the groups quickly

Applications have a new menu bar along the bottom

System settings while inside an immersive application. Swipe from the right hand side

Multi tasking applications by docking them

IE10: text selection similar to how Windows Phone 7 does it

The content that she had selected, has been copied into the "Friend Send" application.
Spellchecking is integrated into windows, so EVERY application gets it

Built in search. Can search inside applications or bing

Earlier in the demo she changed her user profile.
They picked up another PC, and showed that ALL of the changes that she'd made to her profile (changed her user pic, etc) was synced across to the other PCs on stage!

Julie leaves. Steve back on stage

All the apps that you can create are "Metro and full screen". These are the "immersive apps"
When you add applications to your PC, your machine will be getting "richer and richer" as the apps add their functionality to the machine (share, etc.)

How apps are to be built.

Standard desktop apps can be built with the traditional stack.
The new Metro style apps let you choose the development platform you want to use.
All of the fundamentals are built into the kernel. (multitasking, memory management, etc.)

Windows Runtime (WinRT) 18,000 objects for you to use. Use of "objects" here means modern C++. Trumps Win32's C API.
The WinRT APIs are the new low level libraries built into windows. All the languages on top reflect onto WinRT to invoke them.

Can select which language you want. Under the covers it is all the same as they all reflect into WinRT 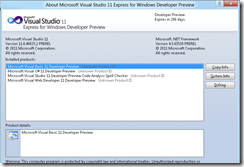 Writing an app with HTML5/JS

The application template has a CSS file to define the styles, etc

Adds some "HTML5 code". That would also run in a web browser.
The code lets him draw lines in a canvas

Adds a javascript click event to the button. Wants it to display a file picker dialog.
Under the covers it is a native control, but Javascript can call into it

Adds functionality to integrate "share" into his application, so that other apps can share files into it. So that you can retrieve photos from Facebook.
The entire app is 58 lines of code

He then opens the application in Expression blend.

The "app bar" is just a DIV in the HTML application
Using the CSS layouts with grids, etc. allow all of the additional system features. Like screen orientation.
Expression blend allows you to see what your app looks like with different screen resolutions, orientations, etc.

Now that the application is built, he wants to upload it to the Windows store.
There is a menu built into Visual Studio that lets you upload directly to the store

He then loads the store to show one that he submitted earlier.
It looks a lot like the Windows Phone 7 store

(Note: Notice that there are Windows Phone 7 games in the games store!)

What about Win32 apps?
Win32 apps are able to be listed in the store. An example is Quicken

Moves onto talking about XAML
He took a sample Silverlight app and compiled it on Windows 8.

IE10 launches. As it is still just a Silverlight app

He then takes the app and creates a Windows 8 XAML based app.
He pastes it all into Visual Studio and it almost works without any modifications.
He just needs to make some namespace changes and it all works.
Win8 has a LOT richer networking functionality than Silverlight has.

He then enables the charms through a few lines of code

This is all mostly compatible with Windows Phone 7.
Took all of the code, changed 1 line of code, and it compiled and worked

Steve comes back on stage

If you build your app in C#/XAML or HTML5/JS, then it will run on ALL hardware that Windows 8 supports
If you want to write native code…. You can… they will help you cross compile it.
Every Windows 8 PC is your target customer (Desktops, laptops, netbooks, slates, etc.)

Note: there are lots of cool hardware demos given, like per pixel touch. But they don’t translate well when written down, so were mostly skipped in there notes)

Win8 supports the widest range of hardware.
UEFI helps windows boot quickly
A cold boot takes less than 8 seconds. The demo they showed, it almost booted quicker than the monitor could turn on.

Win8 has a LOT lower power requirements for SOC (System On a Chip). There is a new super low powered state that leaves the network connected, and instantly turns on.
There are now ARM SOC systems, and a new Intel Atom based SOC.
All the application transitions, transforms, etc. are all hardware accelerated

Has a new "sensor fusion" api that combines all of the sensors together. Takes 3 lines of code

NFC (Near Field Communication) lets you tap computers or cards to share data. He taps a BUILD card onto his PC, and it launches the BUILD website.

Built in functionality for 3G connectivity

New "Ultra books" have desktop chipsets in it. But are thin 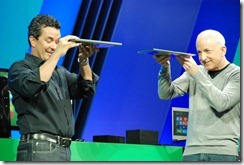 It is thinner than the ethernet & VGA ports. They had to let those 2 ports bump out
Machines are now mostly batteries

Every attendee gets a developer tablet PC
More details about the device can be found at http://www.istartedsomething.com/20110914/build-attendees-take-home-samsung-windows-developer-preview-pcslate/
http://www.winsupersite.com/article/windows8/windows-8-developer-preview-samsung-700t-photo-gallery-140547

Steve back on stage, giving a demo of how a dev can use win8 day to day

No more constant popup nagging about restarting for security patches

Immersive apps can be put into a suspended state where they don't take up any CPU cycles (sounds like Windows Phone 7 lifecycle. Except they stay in memory)

Ability to clean a system and restore it back to a clean state.

Can create a baseline for your PC after you have installed Visual Studio, etc. Then you can restore your PC to that state easily.

Can create performance benchmarks. Then you can watch the health of your PC over time and see if it degrades.

Hyper-V is now built into Windows 8

Remote desktop allows all of the touch centric interaction. Steve was able to easily pan around the new tile based start screen with the touch screen on the tablet, to control the remote desktop

Demonstrated how a tablet could remote desktop into a desktop.

Personally this excites me. You can take your new Win8 tablet around with you, and easily remote into your home PC and interact with it directly with your built in 3G connections. With all the touch features working.

New multi monitor support for the task bar.
You can make it so that the taskbar on each monitor just shows the apps that are on that monitor

Typing in the live tile view, automatically brings up search

They rewrote all the Live applications to have a metro experience for Windows 8
Once you sign in with your LiveId, then it is all integrated in

Written in HTML 5 and Javascript.

Written in HTML5 + JS
Is like Windows Phone 7, brings in all of the services that you have linked in to your LiveId

Every Win8 user has a skydrive for cloud storage.

Connect your PCs together via live

You can browse the photos from another of your PCs, in another location, behind firewalls, directly from within the application. Live does some funky network routing for you.

Can go and browse all of the files on your remote PC via skydrive.com in a web browser

Steve back on stage

Driven by "quality and not by date".