With the success of the Sydney Xamarin hack day a few months back, we decided to repeat the event in as many locations as possible. With me working in Beijing, China for a few months it was the perfect opportunity to run the event in another country!
http://xamarinhackday.com/beijing

Running an event in another country comes with a number of localization issues. Such as different social media sites used, and language translations of any marketing materials that are sent out. We are lucky that China is embracing English as a critical part of their education, and people working in the Tech Industry are more used to speaking in English than other fields.

The mailout we sent out to our Chinese contacts took us 2 weeks to lock down. Initially I thought “this is an English event, being presented in English, for a crowd that is assumed to have a very basic level of English”. Under this assumption I created the initial version of the newsletter in English only. After reviewing it we decided we should probably send it out in Chinese, and I got my PA to translate it. We then decided to merge it all into a single English/Chinese flyer, which then took some time to get the formatting correct. All up it was 2 weeks of iterating on just how to communicate the event. The final result can be found here http://xamarinhackday.com/newsletter/aug2014/beijing-hack-day_en-ch.html

The traditional forms of social media we use in the western world (Twitter, FaceBook, Instagram, YouTube, Tumblr, etc.) are all blocked via the “Great Firewall of China”. This means you need to adapt and use the local alternatives of these services.

We also uploaded the promotional video of the event to YouKu (YouTube clone) so that Chinese participants could view the video http://v.youku.com/v_show/id_XNzQ4MjY0MDMy.html

Another fun issue I knew we would have, is the Xamarin installer instantly fails when you try to run it. As it tries to download Android resources off the Google CDNs, which are all blocked by the Chinese firewall. I had to get all the resources downloaded and put onto a USB key that I could share with the attendees on the day. I had one of my staff create a word document out of the instructions on how to install it offline with these caches, I should blog the instructions in the future.

The event went extremely smoothly on the day. The event was hosted at the Microsoft office, and they had organised everything perfectly, from the prearranged desks, right through to catering for lunch.

Presenting to a Non-Native speaker crowd

From working with Chinese .Net developers here in Beijing, my assumptions about their base level of English proved correct. I was able to give my presentation on using Xamarin basics, right through to advanced MVVM & PCL with Xamarin.Forms. It was meant to be a 3 hour talk, however it took me 4.5 hours as I spoke at 1/2 my normal speed, and was constantly making sure I clarified myself with simpler English, or in another way to help make sure I got the concepts across. 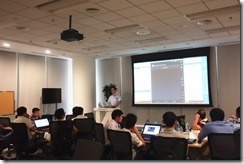 I also tried modifying my presentation style on the day. I knew that if I just did my typical “talk lots to the crowd” that I would lose a lot of them. I tried speaking and writing short notes on what I am saying, to help get the message across. I also tried to “let the code do the talking” and did my demos from 1st principles. By doing it all from the basics it helped ensure they understood what I was doing, as any attempt at trying to explain the background of a pre-canned sample may be futile due to language barrier. 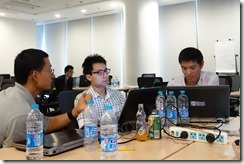 Overall the day went well, with enthusiastic developers learning how to develop with Xamarin, and subsequently start running up their own cross platform apps. I saw many sample apps running identically on Windows Phone & Android via Xamarin.Forms.