An important part of being a Technical Evangelist at Microsoft is continuously upskilling and playing with different technologies. Each of us are usually off speaking to different customers or attending developer events, so to give us a chance to work together as a team and learn from each other we decided to set up a regular internal hackfest.

Last month we had our first, and the Melbourne team were hosted by Frank Arrigo at the Tesltra Innovation Labs. It is an awesome space, and we plan on hosting a LOT of future hackfests there. We also had our remote team mates working away and keeping in touch during the event.

Each of us hacked away on our own experiments, which gave us a chance to check out the latest toolchains and APIs. But it was great being able to just ask each other for advice.
At the end of the 2 days we all jumped onto a conference call and showed off what we were able to throw together. The valuable thing was just hearing the learnings from each person on the “gotchas” they discovered when working with the tools/tech.

Here is a little summary of what each of us worked on and learned:

I wanted to build a little utility that utilised the Microsoft Graph https://developer.microsoft.com/en-us/graph/. The idea being that you want to compare what distribution lists you and your peers are on, as it may make suggestions on ones that you should join (like Azure insiders). I worked through the graph documentation and used the graph explorer https://developer.microsoft.com/en-us/graph/graph-explorer/ to figure out the set of queries I would need to pull out the data I needed:

I’d then be able to compare the DLs that I’m on, with the ones that my peers are on. And flag which ones we have in common, and which ones we don’t share as suggestions.
The next step was to build a web app to do this. I jumped onto the Microsoft Graph quickstart https://developer.microsoft.com/en-us/graph/quick-start to generate a skeleton app as my starting point. This required registering my app on https://apps.dev.microsoft.com/ which would allow my to request permissions from the user, to access the graph on their behalf. 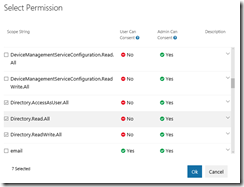 I was able to get my application to authenticate, and query details about myself and my manager. However to retrieve what DLs other people are on requires the Directory.Read.All delegated permission, and because that can potentially leak sensitive information about your organisation, only Admins can great that permission. This meant I was stuck as I don’t think the Microsoft Admins will grant me permission for my dinky little utility to run on the corporate tenant ;-)
But it was still a good exercise as I was able to see each of the pieces working, and got some basic queries working.

Wanted to learn more about how to use Unity (as a lot of our customers are using it now for things like Hololens). She built a 2D Tetris Game, by following the tutorial at https://noobtuts.com/unity/2d-tetris-game

Wanted to play around with Conversations as a Platform and learn more about what is possible with bots.

On day 1 lost a fair bit of time with some visual studio 2017 issues. These seemed to be related to having a pre-release installed side by side with VS 2015 and then installing the full release version.
I intended to test more .Net core items but with the time lost I pivoted on to an area I was comfortable I could rapidly progress.

Further tested this github project which I have contributed to for generating a bot and tab for Microsoft Teams https://github.com/wictorwilen/generator-teams
I used this to generate a Tab and Bot and deploy it to one of my development O365 tenancies.
This included hosting the Bot and Tab an Azure tenancy and deploying via a local Git repository (via this https://docs.microsoft.com/en-us/azure/app-service-web/app-service-deploy-local-git  ). This was a nice simple option that I hadn’t used before as had previously only used VSTS and full GitHub. This was exactly as easy as expected to get running so was a nice option to tick off the list.

As part of the testing of the Tab I confirmed that I could get the Tab Theme switching working (as per https://blogs.msdn.microsoft.com/richard_dizeregas_blog/2017/02/07/microsoft-teams-and-custom-tab-theme/ ).
This worked quite well although on a slow internet connection the event firing was delayed hence there would sometimes be a several seconds of the tab showing before it changed colours to match the teams client.

Also included Office UI Fabric (https://dev.office.com/fabric ) to check if that would have any issues working in a tab inside teams. I only had time to test a few elements including the spinner but these all worked well on the Tab. The main consideration is the theming may not  automatically flow through to these elements as the Teams Style sheets have very specific classes that they target hence things need to be wrapped in the elements for them to be able to change colour when needed.  This is especially important if you want your tab to work on the high contrast setting.

Finally I tried to extend the bot via  some deep linking scenarios following this https://msdn.microsoft.com/en-us/microsoft-teams/deeplinks , however was not as successful.   Asking the bot to send the url taken via manually grabbing a deep link for the tab worked well but that had a different format to the article.

Screenshots of playing with the themes

Simon being Mr. DevOps, wanted to explore combining VSTS with chat bots. Whenever a build was kicked off in VSTS, he wanted to report back if the build was successful or not, and allow users to instruct the bot to trigger Release Management to push the successful build to different environments.

He was able to get the chatbot reporting new events in a Microsoft Teams channel, and having the bot trigger certain things back on VSTS.